Tickets $25, available through the Box Office and outlets listed on the right.
Access Ticketscene here
Age 16 and under are free.  KSMF music class students receive tickets to the Evening Concert Series the week of their classes.

This is going to be a top-quality, fabulous jazz concert that you do not want to miss! 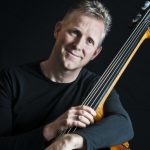 His latest album, “Root Structure” won the JUNO Jazz Album of the Year:Solo in 2018.

Winner of the 2019 JUNO Award for his album “Old Soul”, Robi Botos has been hailed as one of the most diverse multi-instrumentalists of this generation. While Robi is known for being a strong player in the traditional jazz and funk fields, he always incorporates an element of the music he grew up listening.

Born of Romani descent in Hungary, Robi was first introduced to the piano when he was 7 years old, and never looked back.  Immediately after coming to Canada when he turned 20, Robi immersed himself into both the Canadian and international jazz scene.

“Robi is one of the most swingin’, soulful, funky, world class players I’ve ever heard, and he has a technique like you can’t believe. Definitely one of my very favorite players!!!” – Joey Defrancesco

Originally from Sydney, Nova Scotia, Ethan Ardelli is a JUNO award-winning drummer and composer based in Toronto.  Ethan has been one of Canada’s most acclaimed jazz musicians for more than a decade.

Since 2014, Ethan has been leading his own ensemble showcasing his original compositions.