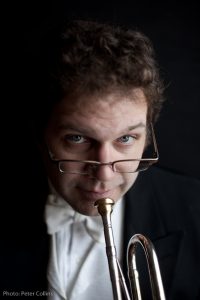 Shawn Spicer has been a professional trumpet player and educator since 1990.  He has played in orchestras across Canada and was principal trumpet of Orchestra London Canada from 1999 to 2014.

Shawn is the principal trumpet of the London Symphonia and is in demand as a freelance player across Ontario Canada.

As a chamber musician Shawn has worked with the True North Brass, the Trillium Brass and the Foothills Brass and has appeared at festivals in Ottawa, Aspen. Sante Fe and Bamfield.

He is active in the early music world where he has played with Tafelmusik, the Toronto Consort, the Hogtown Waites, the Toronto Bach Festival, and Opera Atelier.

Shawn has enjoyed being a regular artist at the Stratford Festival playing in musicals, Festival Theatre Fanfares and onstage.

As an educator Shawn was trumpet instructor at the Canadian Forces School of Music at Borden from 1991 until 1998 and he has taught at Western University since 2002.