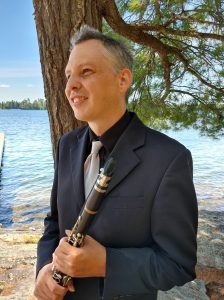 Robert discovered the joys of clarinet music in 1989 at the age of 12. He has since
gone on to study with Charles Bell, the leader of the former Stardust Big Band and the Charlie Bell Trio, Terrance Basom, the clarinet and sax professor at Mohawk College, Hamilton, and Peter Stoll, clarinet and chamber performance professor at the University of Toronto.  Robert has also had the benefit of several master classes with Order of Canada recipient James Campbell.

Principal Clarinet of the Georgian Bay Symphony Orchestra since 2003, Robert continually strives for artistic excellence. By founding the Georgian Bay Symphony Clarinet Choir in 2005 he contributed to the enrichment of cultural appreciation in Owen Sound.
In 2013, Robert also founded the Great Lake Winds concert band as an inclusive venue for players of all ages and levels with a focus on improving musically in a friendly environment.
As the director of the Encore! male barbershop chorus, he is the local ambassador for the joy of singing and ringing chords together in four-part barbershop harmony. Currently, Robert is also the director of the Saugeen Bach Choir, and in this capacity he fulfills his mandate to bring classical choral music to the Saugeen area.
Robert is an experienced guest clinician who is proven to provide fresh perspectives and reinforce basic concepts to enhance school music programs.
He teaches private lessons on clarinet, saxophone and recorder in Owen Sound and via Zoom and finds great satisfaction in witnessing students achieve personal and musical growth.
As the Royal Conservatory of Music Representative for Owen Sound, he facilitates access to Canada’s national standard of musical excellence.
Robert performed at the iconic Glenn Gould Studio in Toronto, the world debut of an original work for solo clarinet by Steven Hobé.
A particular joy over the last few years is performing in the GBS chamber concert series which allowed him to participate in the presentation of diverse repertoire in a chamber group setting. He performed the Copland Clarinet Concerto, considered to be one of the most difficult in the clarinet repertoire, with the Georgian Bay Symphony.
He has been offered the pleasure of performing the Première rhapsodie by Claude Debussy in the upcoming February 2023 concert with the Georgian Bay Symphony.
Robert is grateful for the opportunity to conduct Handel’s Messiah for his fourth year with the Saugeen County Chorus and Orchestra Grey Bruce.