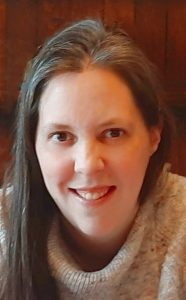 Laura’s music journey began as a child being taught piano by her mother before transferring to another teacher in Blenheim Ontario where she participated in the Chatham Kiwanis Festival and the Laudate Dominum choir. She also became the pianist for the Presbyterian Church in Blenheim. After completing her grade 9 piano exam, her dad, a pastor, received a church position at Chalmers Congregational Church in Armow, which required a move to the Grey Bruce area. Since then, she has completed her Grade 10 RCM in piano through Gertrude Weber of Walkerton and the first segment towards her ARCT teacher’s diploma.  Also since their move here in 2001, she has sung in and accompanied the Saugeen Bach Choir, the Singer Christmas Tree in Walkerton, and a few Choirs in Lions Head.

Laura, along with her mother Hilery, sang in the Saugeen County Chorus for the Messiah as well as the Elijah performances for several years until Hilery’s passing in 2020.

Laura also joined the Scottish Fiddle Orchestra for a year or so a while back until she obtained an organist position and could no longer attend the practices. She has also been heavily involved in the Midwestern Ontario Rotary Music Festival in Walkerton, first in piano, recorder, and a bit of violin, then organ, as well as accompanying many student vocalists and instrumentalists who study with local teachers in the area.

In those years she received many various scholarships, including one for a composition of an organ arrangement on the hymn ‘Stand Up, Stand Up For Jesus!’  She also enrolled several of her own piano students in the Walkerton music festival, in recitals and in exams, and they succeeded well, including one receiving a scholarship to attend the Provincial competition.

Furthermore, Laura also accompanied the Blyth Festival Singers under the direction of Robert Blackwell in Goderich, who later took Laura on as an organ student.
He saw her through the RCCO service playing certificate exam which earned her a scholarship for achieving the highest mark in all of Canada.

Then a year later, she also received a gold medal award for achieving the highest mark in Ontario for her Grade 7 RCM pipe organ exam. In 2019 she jumped a grade and completed her grade 9 RCM exam in organ which she also passed with flying colours.

Laura started her organ career when she became the organist at St. Thomas’s Anglican Church in Walkerton and stayed for six years.  Then for the past 10 years she has been employed as the organist at Wingham United Church and has recently been asked to help out at the St. Thomas Anglican church in Goderich occasionally. She also unexpectedly got involved with Carrick Camp and is now booked for an evening of music on June 25, 2023.

With all this being said, even though COVID brought a halt to furthering Laura’s organ studies as well as her teaching career, she recently has approached the well known organist Ian Sadler of Stratford to take her on as a potential student possibly in the New Year. She can’t wait to see what God has in store for her next.