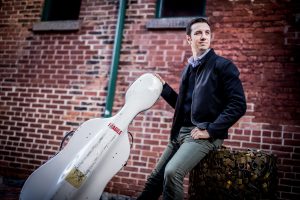 Known for his artistic versatility, BRYAN HOLT has performed throughout North America and abroad in numerous concert halls and alternative venues. Bryan has appeared with many of the leading ensembles in the Greater Toronto Area including Continuum Contemporary Music, Art of Time Ensemble, Against the Grain Theatre, Soundstreams, Thin Edge New Music Collective, Tapestry Opera, and more.  He has also appeared in the cello sections of the Canadian Opera Company Orchestra, National Ballet of Canada Orchestra, Toronto Symphony Orchestra, Esprit Orchestra, Kitchener-Waterloo Symphony Orchestra and many other professional orchestras and ensembles.

Bryan is one half of VC2 Cello Duo (www.vc2celloduo.com) alongside his longtime colleague Amahl Arulanandam. The duo have been featured artists at Toronto Summer Music Festival, Ottawa Chamberfest, 21C Music Festival, New Works Calgary, Women’s Musical Club of Winnipeg, the Prairie Cello Institute and the soundSCAPE Festival (Italy), amongst others. Hailed by CBC Radio as being “a tight unit, with excellent intonation and expression,” VC2 strongly believes in the support and creation of new works by living composers, especially those from their home country of Canada. VC2’s first album “Beethoven’s Cellists” featured five new works by Canadian composers based on the five Beethoven Cello Sonatas. The ensemble is touring alumni of both Debut Atlantic (2018) and Prairie Debut (2019-2020). VC2 will release their second full-length album “I and Thou” on the Leaf Music label in the fall of 2022.

Bryan holds a Doctorate of Music in Cello Performance from the University of Toronto where his thesis focused on the efficacy of online cello lessons.  He holds a masters degree from the Schulich School of Music at McGill University in Solo Cello Performance and completed his undergraduate studies at the University of Toronto, where he was a two-time recipient of the Felix Galimir Award in Chamber Music Performance. His teachers have included Shauna Rolston, Matt Haimovitz, David Hetherington, Simon Fryer, Paul Widner, Matt Brubeck and Charita Holod. He maintains a private studio in downtown Toronto while also visiting several schools as a guest coach in the Greater Toronto Area. In his spare time Bryan religiously follows his sports apps for anything related to the Toronto Maple Leafs or the Toronto Blue Jays.

Want to learn more about Bryan? Check out his interview on the Podcast “Talkin Blues”