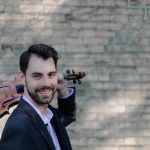 Originally hailing from Vancouver Island, Jeremy Potts is rapidly building acclaim as a soloist and chamber musician in Toronto and abroad.

Recent highlights include a performance of Sarasate’s Carmen Fantasy with the Vancouver Island Symphony and a world premiere recording with Music in the American Wild , a contemporary music septet which performed ten commissioned works throughout United States National Parks in celebration of the National Park Service Centennial.

An experienced chamber musician, Jeremy was appointed as the newest member of the Ton Beau String Quartet in 2017 and has since performed at the Toronto Music Garden Summer Series, Music in St. James Park and 3 in the 6ix as well as presenting their own annual concert series.

Jeremy is a graduate of the University of Victoria and the Eastman School of Music.