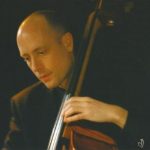 James has been a music educator since 1993, both privately and as an annual faculty member at the Kincardine Music Festival.  He is presently Co-director of the Progressive Music Studio with his wife Hollie Stephan in Cayuga.

In addition to studying privately with some of Canada’s best music educators, James has completed his Grade 7 Royal Conservatory for Double Bass, and graduated on the Dean’s Honour List from Mohawk College, where he received a diploma in the Applied Music program.

Since his first concert at the age of 12, James has performed thousands of concerts across North and South America.  He has played in rock bands, classical orchestras, chamber music groups, folk and Celtic bands, musical theatre, jazz big bands, and smaller jazz ensembles.