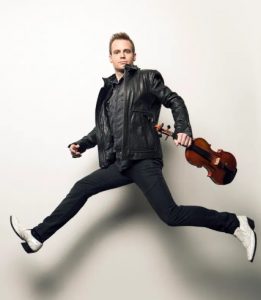 Marc’s concert starts Friday, August 13 at 7:00pm
Use this link  to access this fabulous FREE performance.

Winner of the 2020 ECMA Classical Recording of the Year, the 2017-2018 Mécénat Musica Prix Goyer and a Prix Opus from the Conseil québécois de la musique, Marc Djokic is one of Canada’s most prolific violinists.

A native of Halifax, Nova Scotia, Marc Djokic is known for his powerful and virtuosic performances. His engaging, anecdotal and down-to-earth approach has made him a fan favourite of audiences.

He was named concertmaster of l’Orchestre classique de Montréal in 2018. In summer 2019 Marc embarked on his second European tour with solo recitals, chamber music concerts and masterclasses. His debut album, “Solo Seven”, garnered glowing reviews upon its release in 2018, and his collaborative album “André Mathieu – musique de chambre” was released in 2019.

With the support of Canada Council for the Arts, the Ontario Arts Council and Mécénat Musica, Marc has commissioned numerous Canadian compositions for solo violin, string trio, marimba and violin, two guitars and violin and multi-movement work for ensemble, choir and children’s choir.

From BC Touring to Jeunesses Musicales and Debut Atlantic, Marc has toured several times throughout Canada.

Marc performs on a rare Guarnerius violin from 1740, a Carl Becker from 1927 and a Hannibal Fagnola from 1922.

He lives in Montreal with his wife, visual artist Avery Zhao-Djokic.