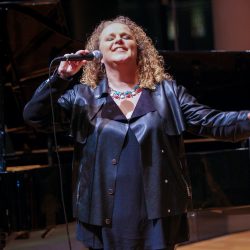 JUNO-nominated vocalist Heather Bambrick prides herself on being an entertainer through and through.  From her skillful, effortless interaction with audiences, to the variety and breadth of her material, Heather approaches every aspect of her performances with the goal of leaving audiences feeling far better after her shows than before they arrived.  This is why her concerts have been described as what happens when “Ella Fitzgerald meets Carol Burnett at a Newfoundland kitchen party”.

Heather’s solo recordings have each received East Coast Music Award nominations for Jazz Recording of the Year, and her 2017 release You’ll Never Know was also nominated for a JUNO Award for Vocal Jazz Album of the Year.