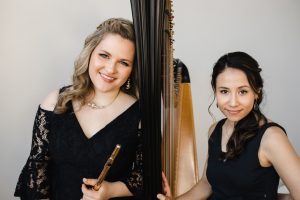 Harpist Emily Belvedere is an award winning musician and avid performer based out of Toronto, Ontario.  Having been praised for her “crystalline technique” and her “ease in merging lyrical and dissonant sounds” Emily has had the opportunity to perform and compete on stages throughout Canada, the United States and Europe.  She is a member and co-founder of two award winning chamber groups with whom she has completed several chamber music residencies and concert tours.  In the fall of 2019, her flute and harp duo, Duo Kalysta, will be releasing their debut album.    Miss Belvedere holds a Bachelor of Music Degree from the Glenn Gould School at the Royal Conservatory of Music and a Masters Degree in Harp Performance from McGIll University.

Named one of 2015’s “Hot 30 Under 30 Canadian Classical Musicians” by CBC Music, flutist Lara Deutsch is a versatile soloist, orchestral, and chamber musician with a passion for connecting with audiences. A strong competitor, Lara was a first prize winner of the Orchestre symphonique de Montréal’s 2014 Manulife Competition, at which she was awarded a total of seven prizes, including the Stingray Music Audience Award. Additionally, she was the Grand Prize Winner of both the National Arts Centre Bursary Competition (2014) and the Canadian Music Competition (2010), as well as a laureate of the Concours Prix d’Europe (2016).