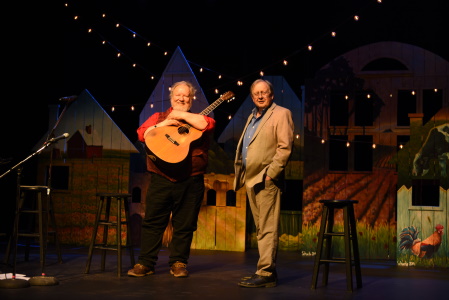 An ALL NEW Field Guide to Rural Living in story and song.
Ian Bell and Dan Needles return to take us on a crop tour of today’s rural Ontario.

Ian is a founding performer for CBC’s Vinyl Café and Dan is the author of the beloved Wingfield Farm stage comedies. Together they explore the rural-urban divide that puzzles so many newcomers to the country.

Prepare to be coached and instructed in the ancient rituals by two experts in the field.

For 30 years, author and playwright Dan Needles has been bringing to life the stories and characters of his mythical Persephone Township, a fictional rural Canadian community two hours north of the big city. His Wingfield Farm series of stage plays have appeared in virtually every English speaking theatre in Canada, including the Stratford Festival and Royal Alex in Toronto and eventually became a popular television series aired on CBC, Bravo and the PBS networks. Thousands of readers have followed his magazine columns in Harrowsmith-Country Life, Country Guide, Small Farm Canada, In the Hills, On the Bay and Watershed.

Nominated three times for the Stephen Leacock Medal for Humour, Dan won in 2003 for his local history of Persephone Township, With Axe and Flask. He is the author of 12 plays, four books and hundreds of magazine columns.  From more than a thousand platforms, Dan has entertained crowds as a banquet and conference speaker, carrying a message of neighbourhood, affection and the power of farmer thinking.

Ontario folksinger, songwriter, instrumentalist and  storyteller, Ian Bell has performed across Canada and in the United States since the late 1970s On his own and with a number of different ensembles, he has appeared at numerous folk festivals (Winnipeg, Mariposa, Edmonton, Ottawa, Yellowknife, Owen Sound, Lunenberg , Montmagny, and others) and in concerts and dances in venues ranging from The Lincoln Center to the finest Ontario barns.