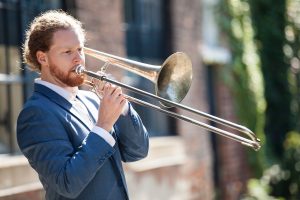 Use this link  to access this fabulous FREE performance.

Chris Butcher is a musician firmly established as a representative of the global music village, transcending genre and cultural predisposition, and pleasing audiences across the world.
As a leader of The Heavyweights Brass Band Chris has been behind one of the brightest lights to emerge on the Canadian music scene. Combine that with his extensive experience as a sideman, work as a radio host/producer, role as an educator/community builder, Chris Butcher illustrates a promising portrait of an influential career in music.

Moving to Toronto in his early twenties he quickly built a solid reputation as one of Canada’s top trombone players, playing in the groups of many of the country’s most prestigious and diverse artists including Jane Bunnett, Jay Douglas, Hilario Duran, Archie Alleyne and QuiQue Escamilla among many others.

In 2015 Chris was awarded Emerging Artist of the Year at the Premier’s Award for Excellence in the Arts and formed Street Brass, a community based ensemble that teaches and performs brass band music of the Americas.

Chris splits time between studying/playing in the great city of New Orleans, touring, and his many ongoing projects in Toronto.

Check out the fabulous ensemble playing with Chris in this virtual concert!