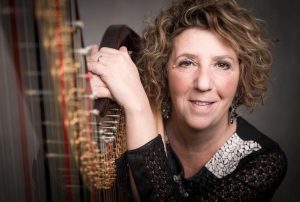 Born in France, Caroline graduated with first prize in harp from the Paris Conservatoire under the guidance of Jacqueline Borot at the age of 18. During her youth, Caroline studied in France with Lily Laskine, one of the most celebrated harpists of the 20th century.  After arriving in Canada Caroline completed an Artist Diploma at McGill University School of Music.

Caroline’s recordings and live performances have been featured on CBC Radio, NPR Classical 24 network and Classical stations throughout the USA, Canada, Europe and Asia.  Her live radio performances include interviews and performances on PBS/NPR radio’s Backstage Pass series.

Caroline has been described as a “World Class Harpist” in Harp Column Magazine, and her live performances have been reviewed as “Brilliant” and “Outstanding”.   Caroline’s latest recording Serenata was reviewed by Remy Franck in his Pizzicato publication where he noted, “Serenata is one of the most beautiful harp CDs I have ever heard, and it will melt every heart.”

Links to these free concerts will be uploaded to this website starting August 10.

Donations to the Festival are gratefully accepted.

This Donate button accesses CanadaHelps, where you can easily donate to the Festival and automatically receive a tax receipt.