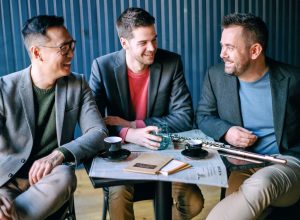 Montreal-based Hear•Say (flutist Dakota Martin, cellist Thomas Beard and pianist Phil Chiu) is delighted to be entering their third season; going strong in their mission of delivering thrilling performances of classical music gems in smaller communities across Canada. Born out of a desire to perform concerts in each of their hometowns (and to show-off the cooking skills of their respective mothers), they are thrilled to be able to share some music with you all at the Kincardine Summer Music Festival.

Season One featured stunning watercolour-inspired works by Gaubert, an operatic overture from Weber, as well as Czech fireworks from Martinů and the uniquely Argentinian flavour of Piazzolla.

Season Two showcased the comedic stylings of Joseph Haydn, pianistic-flourishes from Hummel, and finished with the awesome jazz-inspired trio by Nikolai Kapustin.

This season they will explore the music of famous-in-her-time-but-ignored-since-for-no-reason French romantic Louise Farrenc (a favourite of Robert Schumann and other critics), the flute virtuosity of Franz Doppler, and an excerpt from one humdinger of a piece: Hear•Say ’s original arrangement of Stravinsky’s fantastical ballet epic, Petrouchka.

Hear•Say would like to gratefully acknowledge the support of all the communities that have come together to share in these moments of excellent music and great fellowship over the years. They’d also like to reaffirm that, yes, Phil’s Dakota’s Thomas’ mom is the best cook.

Phil Chiu, pianist
“ A pianist-painter who transforms each musical idea into a beautiful array of colors ” (La Presse), Philip Chiu is acclaimed for his brilliant pianism, sensitive listening, and a stage presence that eschews the hermit-pianist image and favours openness, authenticity, and connection with audiences.

Inaugural winner of the Mécénat Musica Prix Goyer ($125,000), Philip has become one of Canada’s leading musicians through his infectious love of music and his passion for creation and communication.

Philip concertizes extensively as soloist and chamber musician and has performed solo recitals and chamber music concerts in most major venues across Canada, as well as concert halls in France, Japan and the United States.

Philip has recorded for Warner Music, Analekta, ATMA Classique and CBC Music. He can be heard on BBC Radio 3, France Musique, ICI Musique and CBC Music. He is eternally grateful for the support of Mécénat Musica, the Sylva Gelber Music Foundation, and the Canada Council for the Arts. Philip is represented by Andrew Kwan Artists Management.

In addition to his orchestral pursuits, Dakota is an avid soloist and chamber player. A prize winner at the Canadian Music Competition and the Concours OSM Manuvie (Montreal), he has appeared as a soloist with the McGill Symphony Orchestra and Pronto Musica Chamber Orchestra. Dakota is an alumnus of McGill’s Schulich School of Music (Montreal) and the Royal College of Music (London), and has studied with Timothy Hutchins and Susan Milan, respectively.

He has garnered attention at the competition level as soloist and chamber musician, winning grand prizes at the Stratford Concert Competition and the McGill Chamber Competition (earning an invitation to perform at the Salzburger Kammermusikfestival in Austria and the opportunity to workshop at the Mozarteum with Wolfgang Redik). He has also performed in masterclasses for Philippe Mueller, Chris Hoyle and Ralph Kirshbaum.

Outside the classical realm, Thomas has enjoyed collaborations with singer/songwriters and JUNO award-winners Mike Rud and Shari Ulrich, folk musician Kyrie Kristmanson, pop artist ‘Gabriella’, and a variety of other indie groups.

Thomas plays on a cello made by Pietro Antonio Cateni and bow made by François Malo, provided graciously to him by CANIMEX INC., from Drummondville (Quebec) Canada.