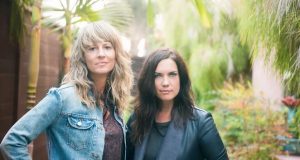 After 20 years together, JUNO-nominated singer-songwriting duo, Madison Violet, are as much wanderers as they are musicians.

Lisa MacIsaac (Cape Breton Island) and Brenley MacEachern (Kincardine) decided that they would create a sound that would have its roots in their past while continually exploring new sounds.

From the beginning, these Toronto -based multi-instrumentalists and amazing vocalists wrote all of their own music and lyrics.

They have a JUNO nomination, a Canadian Folk Music Award for Best Vocal Group Album of the Year and a Critic’s Choice Award from Country Music People’s Magazine.

They won the Grand Prize in the Maxell John Lennon Song Writing Contest (which was voted on by a panel of distinguished artists including Elton John, Tim McGraw, Black Eyed Peas, Fergie, John Legend, Enrique Iglesias and Mary J.Blige).

Madison Violet were on Germany’s WDR’s list of ‘Best Bands of All Time’, and their 2014 single “These Ships” released by US giant Ultra Records won 1,000,000 plays on Spotify.

Madison Violet has 9 studio albums to their credit and released their latest album “Everything’s Shifting” in 2019.

This is a fabulous concert!  Don’t miss it!