Rick Fines is an engaging storyteller and songwriter. He has won MapleBlues Awards for Songwriter of the Year and Acoustic Act Of The Year  (twice),  won first place in the blues category of 2003 International Songwriting Competition, with B.B. King one of the judges, received nominations from both the Juno and the Handy Awards, played for legendary blues piano player Pinetop Perkins. Rick toured from Newfoundland to B.C. to the Arctic last year alone.

Rick has just released “Driving home” – All original, upbeat and optimistic, this is a more electric, bigger production featuring his best writing to date. 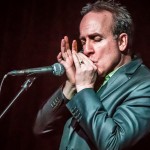 Roly Platt has enjoyed a long and musically rewarding career as both a live and studio harmonica player in the Canadian scene for the past 40 years. He has had the pleasure of touring and recording with many greats in the business, including: Matt Minglewood, Dutch Mason, David Clayton-Thomas, Rita Chiarelli, Suzie Vinnick and Ronnie Hawkins.  Roly had been recorded on over 1,800 individual album cuts, movie scores and national jingles and is now working on sessions for clients from around the globe via his home studio.

Registrations are closed for this event.